Historic Uses of Garlic in Northern Europe and England 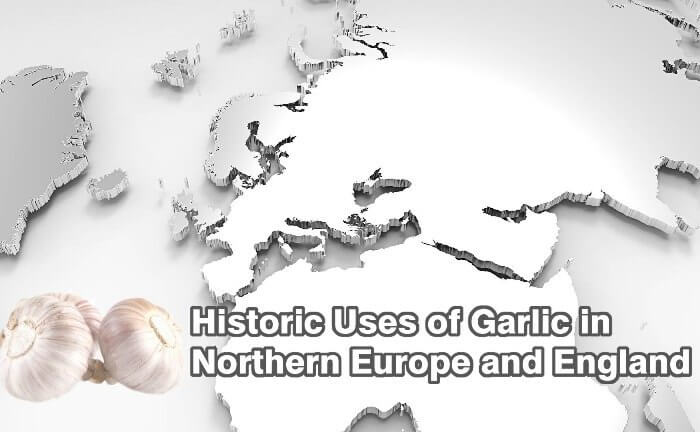 These days, garlic is used in varieties of ways in food to add flavor to it. Even it is used by many to cure different health conditions. This is because of its amazing medicinal properties. But this is not a new development at all.

Even 5000 years ago, it was used by people all around the world as medicine. This includes European countries too. There are some interesting historic uses of garlic in both England and northern Europe. In ancient times, the medicinal uses of garlic were quite praised in various parts of Northern Europe as well as in England.

History of Garlic In Northern Europe

One of the famous herbalists of Germany, Gerhard Madaus told about the medicinal uses of garlic. He learned the uses from the Romans for seizures. Even the midwives of Germany used this garlic traditionally to accelerate labor.

Also Read: Garlic was Used in Ancient Greece and Rome as Food and Medicine

They used to crush and mix garlic in the milk. The use of this ingredient became a lot popular in Austria and Germany after the invasion by the Turks. It was around 17th century when the popularity of garlic increased in northern Europe.

Garlic in ancient northern Europe actually came into scene in 1683 during the siege of Vienna. The Turks carried out a long siege with their enormous army. Their army has a huge stock of coffee and garlic.

Then a force from the north came for relieving the town from Turks. When the Turk got retreated, many of their stored coffees and garlics were left behind. Since then garlic become very popular in North Europe and is also an integral part of Viennese cuisines.

History Of Garlic In England

The use of garlic in England can be traced back to the year 1000 A.D. It was the time when the Anglo-Saxon peasants used garlic in various forms. It was considered as an antidote for any serious and life-threatening diseases and illness by the peasants.

Thus, garlic was known as the “poor man’s treacle” in England for many centuries. The peasants were not able to afford the expensive and highly prized medicines and thus they relied on garlic. John Gerard, the author of the famous Historic of Plants (1597) wrote a lot about garlic. Some of the uses are:

Thus, garlic in ancient England was mainly used for medicinal purposes. It was considered a great medicine for many illness at any age.

So, these are the historic uses of garlic in England as in northern Europe. It is the best solution for cough, cold and infections back then too. In the ancient times, there were no medicines and pills for every illness. People used to rely on plants and herbs mainly for curing and preventing them. Thus, they used to have garlic in various ways to treat their health conditions. Read: History of Garlic in North America: Used in America as Food and Medicine for Hundreds of Years