History of Garlic in North America: Used in America as Food and Medicine for Hundreds of Years 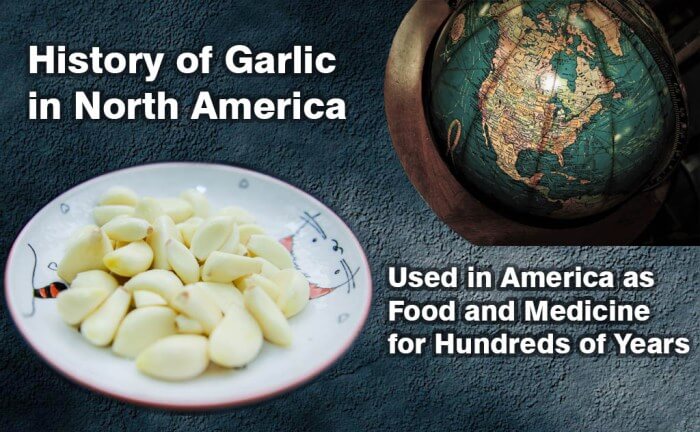 As we all know, garlic is one of the best natural remedies for many health conditions. This is because it has some exceptionally great medicinal properties in it. But the use of garlic as food or medicine is not a recent development. The use of garlic can be traced back centuries ago.

Researchers have found many historical documents and records where garlic is mentioned several times as a great tonic or medicine. Even, garlic has a great history in North America. It was used by several people both as medicine and as food. Read on to know more about the history of garlic in North America: used in America as food and medicine for hundreds of years.

History Of Garlic In North America

The Spanish people who settled in Mexico and Southwest America brought the garlic along with them. They used it as medicine and as food too. Nowadays, garlic is cultivated throughout the American Southwest as well as Mexico. The largest supplier of garlic all over USA is California. This is used in a lot of medicines throughout the Southwest. It is considered as the ideal remedy for cough and cold.

So, people eat four to five cloves of garlic daily for clearing up the mucous formed during chronic cough. Americans use the garlic as food as well as medicine for hundreds of years now. This is because of the antifungal, antibacterial, and antioxidant properties of garlic. You can read further about the history of garlic here.

How Americans Used Garlic As Medicine?

Decades earlier, the colonists from Britain brought the garlic to North America with them. For them and the early settlers, garlic was the best natural worm remedy. These traditional uses of garlic by the British were also maintained by the Americans.

In the middle of nineteenth century, the USA had developed a very important system of herbal medicine. This idea was initiated by Dr. William Cook who has written many medical-level books based on herbal medicines in United States. The main task of the medicines during the mid-19th century is to treat and cure all the illness caused due to cold.

According to Cook, garlic is more than just a food. It is an effective stimulant and great diffusive for many conditions occur due to cold. Some of the properties of garlic listed by Dr. William Cook are:

Garlic was also mentioned in the United States Pharmacopoeia which used to be an official medicine listing in US till 1900. Even garlic was introduced as one of the best counterirritants for pneumonia and chest pain. Years ago, Americans used to soak clothes in the garlic tea and then apply that on the back and chest of patients suffering from pneumonia. Read: History of Garlic in Ancient Indian and Mesopotamian Civilizations

So, this is the history of garlic in North America: used in America as food and medicine for hundreds of years. It is also used for improving blood circulation as well as for treating skin irritation.