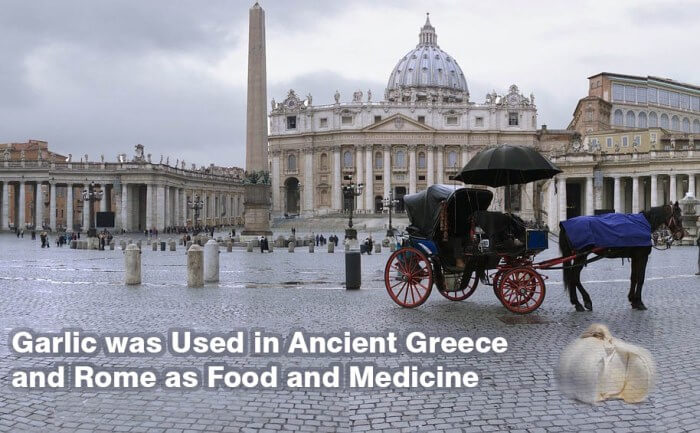 Garlic is undoubtedly one of the best natural foods with some great benefits. It is quite popular all over the world. Even, garlic was used as a food as well as medicine in the ancient Rome and Greece. This food has a very interesting history all over the world.

Though garlic is used for various benefits nowadays, the use of it can be traced back 5000 years ago. Garlic was used as a food as well as medicine through the ancient Greece and Rome. To know more about the garlic history as food and medicine, read on.

Garlic was used for various reasons throughout the ancient Greece. People used to use it as a food as well as medicine for treating health conditions. From about 1000 B.C, Homer wrote in Odyssey that garlic was used as a part of entertainment by Nestor. He used to serve it to his guest Machaon. Even he mentioned that garlic had allowed Ulysses to run away from Circe. Besides these, garlic in ancient Greece had many more uses too.

In the earlier Olympic Games, the athletes used to consume garlic before they participate in any competition. This used to help them to gain strength. Even, the Greek soldiers used to eat cloves of garlic before any battle. It was used as a medicine on the battlefield. The garlic used to be crushed and soaked in wine for drinking it as a tonic. It used to help them to prevent any infections in wounds. Thus, garlic was also used in the wounds to treat them even in the World War I held in Europe.

Hippocrates, also popular as “Father of Medicine”, recommended garlic as a useful medicine. He mentioned that garlic is great for wounds, infections, leprosy, digestive problems and cancer. Besides that garlic was used for many purposes like:

Even it was mixed with oil and salt for treating skin afflictions. Also, it was crushed with black olives to treat diuretic. Garlic was also mixed with honey for leprosy and moles. To get more information, read.

From the very ancient times, it has been seen that Romans used to eat garlic. Garlic was a staple food for the Roman Army. They used to eat it as food as well as drink it. The garlic in ancient Rome is used beyond just a flavoring agent. Previously, the army camps were much prone to the epidemic diseases and thus garlic can be great for preventing or curing it. The tonic properties of this ingredient used to give strength to the soldiers. They mix the crushed garlic in soups, boiled barley and also in water for disinfecting the wounds in battlefield. Read to know more history of garlic in Rome.

So, this is the garlic history as food and medicine in ancient Greece and Rome. There are various treatments that used to be done with the help of garlic back then. Greek and Roman soldiers and people used to treat common cold, ear problems, asthma, cough and tuberculosis with the help of this. Read: Historic Uses of Garlic in Northern Europe and England